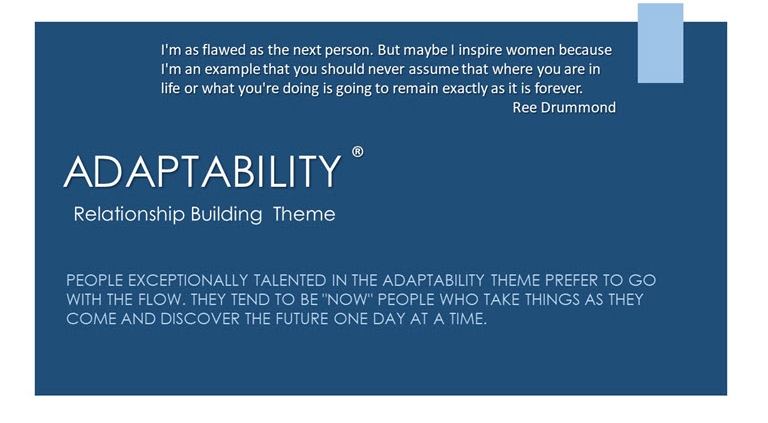 Adapters live in the moment. They can pivot and be responsive. Very spontaneous, they prefer to focus on here and now rather than thinking long-term. Adapters see life as one choice at a time. People with the strength of Adaptability® tend to be very flexible so that when sudden detours happen in their work or family life, they remain centered and hold on to their sense of calm. This can be soothing and encouraging to other people who react less favorably in the face of change.

My wife, Rhonda, has Adaptability. And while many people hate cooking duty. She has become the culinary wizard in our home. She may start with a recipe gleaned from Bobby Flay or Giada on the cooking channel, then she adds her own spicy twist to the dish. Her saying is, “Everyone has to eat, why not make it special.”

Others can learn from Adapters by seeing the value in spontaneity. I’m a structured person by nature, but marrying an Adapter has helped me to appreciate living in the moment. In the spirit of Adaptability, when I gave a commencement speech at Grayson County College in Sherman, Texas, where I live, and I left a section of the speech unwritten—I opened it up so that I could share whatever was in my heart at the moment.

How could a person monetize their Adaptability® strength?

Ree Drummond, who is better known to most people as The Pioneer Woman, never intended to be a pioneer woman. But the way she has turned this major life change into a positive outcome, I would believe she has the strength of Adaptability. Anne Marie, nicknamed Ree, grew up in the oil town of Bartlesville, Oklahoma. After she graduated high school in 1987, she left Oklahoma to attend college in Los Angeles, California. She graduated from the University of Southern California in 1991, having first studied journalism before switching to gerontology. She planned to attend law school in Chicago, but all that changed when she met, and on September 21, 1996, married her husband, Ladd Drummond, and her heart took her in a completely different direction.

Adaptability is the ability to live in the present, freely, and willingly able to respond to the demands and changes of the moment. When things change, people with the strength of Adaptability easily adapt and change—they are flexible. Ree needed every bit of this flexibility to go from a woman who dreamed of being a lawyer to the wife of a cattle rancher.

Drummond began blogging in May 2006. Her current blog is titled The Pioneer Woman. It was initially titled Confessions of a Pioneer Woman. The latter is now the title of a section within the site. In her blog, Ree writes about topics from her life on the ranch to raising her children. About a year after launching her blog, she posted her first recipe and a tutorial on “How to Cook a Steak.” She wanted to make sure that everyone understood her recipe, so she used her love of photography and posted 20 photos explaining the cooking process in what she calls “ridiculous detail.” Her stories about her husband, family, and country living, and her step-by-step cooking instructions and elaborate food photography, proved highly popular with readers.

In April 2008, Ree decided to have a contest in the cooking section of her blog. She asked readers to share one of their favorite recipes. In less than 24 hours, Ree had over 5000 recipes submitted. Realizing that she had developed a community that followed her blog, she wanted to find a way to make these recipes available to all of her community. Once again, she flexed her adaptability, moving from just a blog to a searchable catalog for the recipes. A little over a year later, she announced the launch of TastyKitchen.com – a simple and free online community website with the tagline Favorite Recipes from Real Kitchens Everywhere!. (Perhaps Rhonda could start a blog and use her tag line “Everyone has to eat, why not make it special.”)

What has she taken this blog and turned it into in the past 14 years? Ree Drummond has turned her small blog into an empire. She has a Food Network cooking show, a series of cookbooks, The Pioneer Woman blog, The Pioneer Woman magazine, as well as her food and home goods line. Drummond also has an ice cream shop, hotel, pizza shop, and coffee line. If you want to try Drummond’s coffee, all you have to do is head down to The Pioneer Woman Mercantile in Pawhuska, Oklahoma. Rhonda enjoys watching and learning from her. On a workation a couple of years ago, Rhonda went to her mercantile in Oklahoma. Ree has taken a simple blog into an estimated net worth of over $55 million.

Do you find yourself in a place that you never expected to be? How could you adapt and pivot your career like Ree Drummond? How could you authentically be yourself, engage others, and prosper? Let me know in the comments below. Want to talk with me about how to create your empire or other strengths questions you have? Please schedule you free Ask Brent Anything call, and let’s talk strengths.