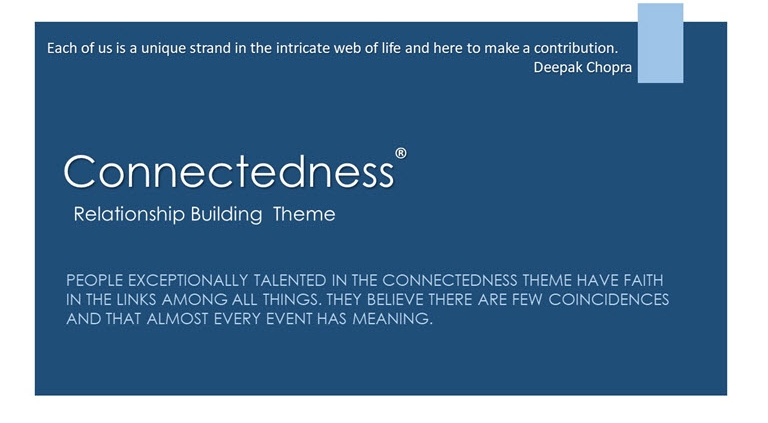 Individuals with the strength of Connectedness® believe things happen for a reason. They prize their sense of faith, mystery, and purpose. They value diversity, and they are web-builders because they uncover sacred connections between all things and people.

Seventy-one year old, Deepak Chopra, has built his entire brand and business around his #2 talent theme of Connectedness. Chopra has become one of the best-known, and wealthiest guru’s in alternative medicine, a licensed physician who became famous after his debut on the Oprah Winfrey Show in 1993. In 1996 he co-founded the Chopra Center for Wellbeing. Sometimes criticized by the medical and scientific community for what they call pseudoscience, but no one can deny the multitude of followers who resonate with Chopra’s message of synchronicity, well-being, interconnectedness.

When he came to the United States, he completed residencies in internal medicine and endocrinology. He became chief of staff at New England Memorial Hospital (NEMH) in 1980. In 1985, he met Maharishi Mahesh Yogi and became involved in the Transcendental Meditation (TM) movement. Shortly after that, he resigned from his position at NEMH to establish the Maharishi Ayurveda Health Center. Things began to change for him in 1993 when Chopra gained a following after he was interviewed about his books on The Oprah Winfrey Show. He once again made a move and left the TM movement to become the executive director of Sharp HealthCare’s Center for Mind-Body Medicine. In 1996, he co-founded the Chopra Center for Wellbeing.

In an interview with Entrepreneur magazine several years ago, Chopra shared his 7 tips for business success and thoughts on the entrepreneurial soul.

1. Ask yourself, ‘Why do I want to be in business?’ Discovering your strengths and values, leads to self-awareness, purpose, and your contribution to society.

2. Define your vision for success. It could be fulfillment, recognition, or fortune. Chopra states ultimately for him business is about happiness and joy.

3. Think about who you want to work with and what you want to accomplish together. You can hear Connectedness from Deepak’s interview when he asks, “How will you impact the larger ecosystem of the world, and what kind of world do you really want to live in?”

4. Detach yourself from the outcome. Become process-oriented versus outcome oriented. Pursue excellence, ignore success, and seek making a greater difference.

5. Create goals and establish timelines for achieving them. Chopra has built a team that has helped him write 21 NY Times Best Sellers, more than 80 books, and sold more than 20 million books worldwide.

6. Know what it means to be disruptive and disrupt. Business success doesn’t normally come from being a copycat. It’s about being cutting edge and doing something others haven’t thought about. Chopra was one of the first to start virtual reality (VR) meditation experiences.

7. See problems as opportunities. Successful people focus on growth, change, innovation, and turn the problem to their advantage.

Chopra never intended to be an entrepreneur. He felt that mainstream medicine was not doing enough so he started writing books for his patients. He calls himself an “entrepreneur of the abstract.” He has learned to monetize his Connectedness strength building a net worth of $170 million.

Where is your career right now? How could you move forward, monetizing your connectedness strength? How could you become an entrepreneur of the abstract? Let me know in the comments below. Want to talk with me about how you could monetize your strengths or other business-building questions you have? Please schedule you free Ask Brent Anything call, and let’s talk strengths.