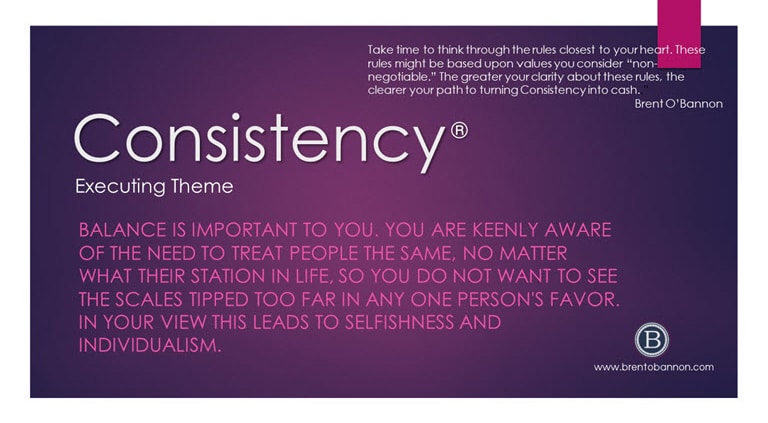 How important is fairness to you?  Do you try to live your life by the Golden Rule?  Do other people think that you’re predictable in the things that you do?

A person with the strength of Consistency® believes in fairness. You treat others equally. You understand that all people deserve respect, and everyone should play by the same rules. Entrepreneurs steeped in Consistency are strong at leveling the playing field and ensuring no one person is treated better, or worse, than another.

National Football League referee Edward G. Hochuli is a commendable example.   Though now retired, Hochuli was a referee from 1990 to 2018.  In a poll conducted by ESPN in 2008, Hochuli tied fellow referee Mike Carey for “best referee” votes (eight each) among NFL head coaches. After the retirements of Gerald Austin and Larry Nemmers following the 2007 season, Hochuli became the NFL’s longest-tenured referee for the next decade. Before his football officiating career started, Hochuli played college ball at University of Texas at El Paso for four seasons. He has refereed many playoff games and two Super Bowl events, and he was voted best referee by the NFL head coaches. Hochuli’s belief in rules runs deep. Not only was he an NFL referee, but an attorney at Jones, Skelton & Hochuli.

Hochuli specializes in civil litigation in the areas of Bad Faith and Extra-Contractual Liability, Complex Litigation, Insurance Coverage and Fraud, Legal Malpractice and Professional Liability.  There are similarities between the football field and courtroom, “They don’t see themselves as traffic cops or walking rulebooks. They’re keepers of the integrity of the game.” says Jerry Markbreit also a long time NFL referee.

Those with Consistency ensure that everyone on the field follows a clear set of guidelines. In addition to following rules, as a person with Consistency, you are especially adept at recognizing other people’s strengths, celebrating them, and helping build self- esteem and self-confidence. You thrive on integrity, building team spirit and rallying a group or team to move in the same direction.

In a large family, a patriarch like Hochuli may not have a special, unique relationship with each individual because of his group-focused mindset. He may focus instead on making sure all the kids in the nest are fed and clothed the same.

So how do you earn money from Consistency? Ed Hochuli’s net worth is estimated around $6 million. If he can do it, you can too. After retiring as an NFL referee, he is now monetizing his Consistency as a consultant in the booth as a rules analyst for CBS.

Here’s how: Take time to think through the rules closest to your heart. These rules might be based upon values you consider “non-negotiable.” The greater your clarity about these rules, the clearer your path to turning Consistency into cash.

Say you are an artist—photographer, videographer, painter, craftsman, and so on, and you want to turn this passion into a successful online business. If one of your rules is to create sales copy that over-sells or over-promises (a typical practice in online marketing), then marketing your art may take on its own unique flavor. Maybe your website is a form of art and expresses your product in a way that uses little or no sales copy at all. How many websites have you seen lately that eliminate sales copy, over-sized “Buy Now” buttons, and gaudy graphics and still manage to get their message across? This counter intuitive approach alone may be enough to garner a critical mass of online attention.

Perhaps your role in the art community works to level the playing field for other artists, and in doing so positions you as “the” expert at your craft. A somewhat contrarian approach to turning Consistency into income is to promote yourself by promoting others. Cultivate a reputation for recognizing those who really deserve credit, and then be a mouthpiece for giving that credit. Ensure that respect is always given to those who truly perform well or have a new take on using old mediums. In a way, you can be the conscience of the group or community you participate in.

Not sure how you could monetize Consistency?  Remember you can schedule your Ask Brent Anything call. Let’s talk strengths.