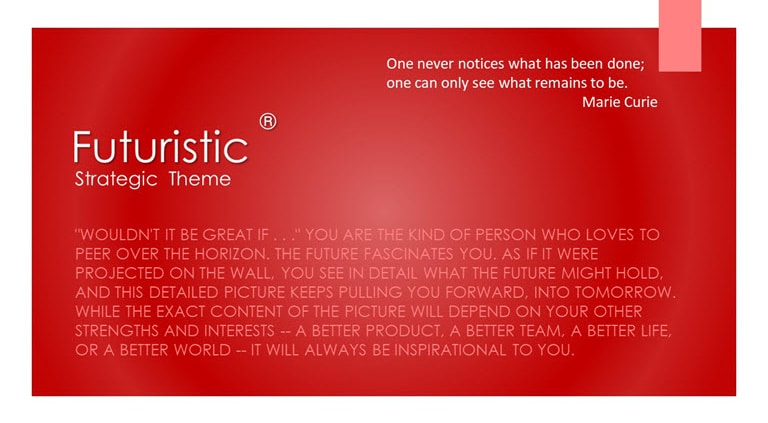 “Wouldn’t it be great if . . .” is this the question that you often ask as you view what the future might hold, and this picture keeps pulling you toward the future.

People with the Futuristic ® strength love to look across the horizon. As dreamers, they are fascinated and energized by the future, and they have great imaginations. I wouldn’t be surprised if George Lucas, the legendary Star Wars inventor and movie producer, was a Futurist. Futurists are all about possibilities.

One of my Futuristic clients makes a living as a career coach for teenagers going into college. She is gifted at helping children find their niche in the career world. Because she is the type of person that loves to dream and look to tomorrow, she is an incredible career coach.

Some people with the Futuristic strength are gifted at making predictions in business or the stock market. Futuristic speakers are individuals whose imaginations can go “where no man has gone before.” Futurist individuals can communicate and share predictions. They are often drawn to the fields of science and technology because both fields are continuously evolving.

My client, Michael is monetizing his Futuristic strength as a millennial CEO who has formed a virtual reality software company. He dreamed of being a millionaire by the age of twenty-five, and he did it! As a teenager, Michael was able to see the bull market for Bitcoin, a decentralized digital currency that enables instant payments to anyone. He wisely invested and is now able to fund the growth of his company using Bitcoin. If you or I had invested just $1,000 in Bitcoin the year it was first publicly available, you would now be richer to the tune of $36.7 million.

Marie Curie was a brilliant scientist during a time when the words woman and scientist didn’t go together. Curie was the first female professor at the Sorbonne in Paris and the first female Nobel laureate ever. Along with her husband, physicist Pierre Curie, she was awarded half of the Nobel Prize in Physics in 1903 for their work in spontaneous radiation (the other half went to Henri Becquerel for discovering it). She was also the only person ever to receive two Nobels in two different scientific categories — she won the Nobel Prize in Chemistry in 1911, also for her work in radioactivity. Between 1903 and 1923, she went on to earn seven (7) more prestigious awards for her work.

Her early research that she worked on with her husband was often done under challenging conditions, laboratory arrangements were meager, and both had to undertake a considerable amount of teaching to earn a livelihood. The Curies conducted the majority of their research and experimentation which led to their discovery of the elements Radium and Polonium in a laboratory that was described by the respected German chemist, Wilhelm Ostwald, as “a cross between a stable and a potato shed.” When Ostwald was first shown the premises, he assumed that it was “a practical joke.”

Soon after Marie received her second Nobel Prize in 1911, two laboratories were constructed at Sorbonne. In one of the laboratories, Marie led a team of researchers analyzing radioactivity, while the other laboratory was used to explore possible cancer treatments. Her forward-looking research had taken a long way from the meager laboratories where she started.

Curie’s contribution during the First World War was praiseworthy. Knowing the need of the time, she sought to provide relief to those injured on the battlefield. She developed portable radiology units that would assist field surgeons. She made hollow needles containing radon that could be used for sterilization. Thanks to her effort, the lives of many soldiers could be saved. Due to her eye on the future, there are discoveries she made that help keep you and me alive today.

Futuristic people often stay in their heads and therefore need someone with the Activator strength to help them follow through with current ideas, goals, and dreams.

Does the future fascinate and energize you? Are you a dreamer who sees visions of what could be and who values those visions? You can energize others, too. Your pictures can raise their sights and thereby their spirits. You can paint pictures of the future for them. Make the picture as rich as you possibly can, and people will want to be part of the hope you bring.

Not sure where you are and need some conversation around that. Remember you can schedule your Ask Brent Anything call. Let’s talk about strengths.