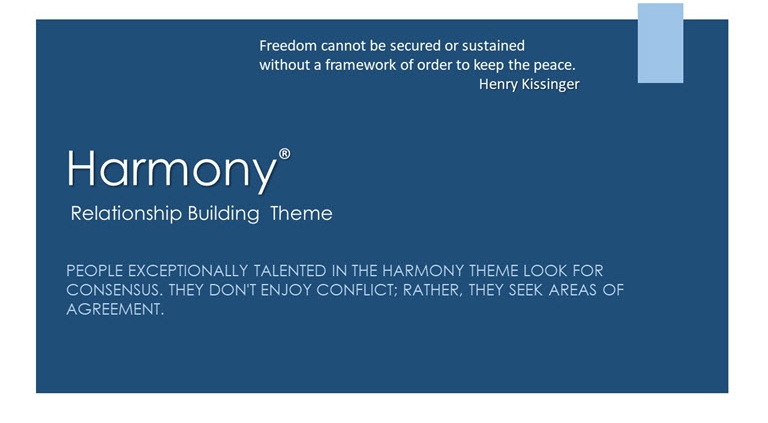 People with the Harmony® strength are natural peacemakers, they are adept at helping team members to understand and respect each other to get along better. Harmonious individuals are practical, especially in terms of strategic planning and executing difficult tasks.

They look for ways to promote agreement and consensus. They dislike the unproductive nature of fighting and are interested in keeping the peace in order to get more done. When it comes to theory or opinion, Harmonious individuals tend to shy away and focus on concrete ways to connect.

For that reason, a Harmonious person will likely defer to what they are really thinking. They may hold their tongue for the sake of agreement because they don’t want to rock the boat. Moreover, they believe firmly in mutual respect. People with the Harmony strength believe, when you hurt someone else, you hurt yourself.

CAREfrontation is a system I developed to deal with conflict and confrontation in a caring fashion. CAREfrontation teaches people how to connect, assert, resolve, and engage in the face of conflict. All Harmonious individuals could benefit from working smarter in their conflict resolution skills.

Henry Kissinger served as United States Secretary of State and National Security Advisor under the presidential administrations of Richard Nixon and Gerald Ford. His family fled Nazi Germany in 1938 when Kissinger was 15 years old. He went from being a refugee to become National Security Advisor in 1969 and U.S. Secretary of State in 1973. Kissinger played a large part in the foreign policy of the United States between the years of 1969 and 1977. His accomplishments during this time include:

For his actions negotiating a ceasefire in Vietnam, Kissinger received the 1973 Nobel Peace Prize.

This is the top prize that anyone can win for bringing harmony to difficult situations. The Peace Prize is awarded to the person or persons who, in the preceding year, shall have done the most or the best work for fraternity between nations, for the abolition or reduction of standing armies and for the holding and promotion of peace congresses.” These are the instructions for the prize left by Alfred Nobel’s will. It would be interesting to know how many Nobel Peace Prize winners have Harmony in their top five strengths, as peace making is what they are all about.

Just as in politics and world affairs, business needs negotiators with the harmony strength. After leaving the government, Kissinger formed Kissinger Associates, an international geopolitical consulting firm. Kissinger has written over one dozen books on diplomatic history and international relations.

On May 27, 2020, Henry Kissinger will be 97. For more than sixty-year Henry Kissinger’s name has been synonymous with harmony and negotiation. He used this refined strength to build a net worth of over $20 million.

Harmony has the power to bring rivals together, a war zone, a workplace, a homestead, no matter the setting, into a miraculous smarter, caring environment. How are you monetizing your Harmony strength? What ways do you see that you can use this strength to conduct negotiations that are beneficial for your business? Let me know in the comments below. Want to talk with me about how you could monetize your strengths or other business-building questions you have? Please schedule you free Ask Brent Anything call, and Let’s Talk Strengths.