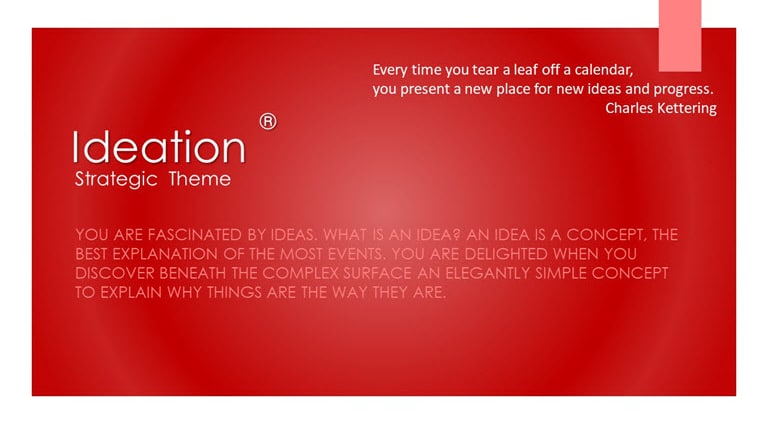 The Gallup StrengthsFinder definition of Ideation® says, “People especially talented in the Ideation theme are fascinated by ideas. They are able to find connections between seemingly disparate phenomena.” In their experience, ideas are the heartbeat of life.

Finding new and creative ways to accomplish a goal is what drives people with the Ideation theme. Having the single-mindedness to bring these ideas to life is the key to success.

I would venture to guess that Donald Trump has the strength of Ideation. One of the most successful real estate tycoons in the world, Trump is fascinated with ideas. He loves exploring and explaining concepts. His mind is always looking for new angles, new perspectives, or new views. He perceives possibilities in ways radically different from the common person. And he’s an idea guy when it comes to architecture, as well as golf—one of his company’s spin-off TV programs is called Donald Trump’s Fabulous World of Golf.

Trump loves golf. But even more than that, he loves designing golf courses. And you should see the sparkle in his eye when he talks about his ideas on how to carve out a beautiful, exciting, challenging golf course in the middle of the Earth. He’s on a mission to create and change the world, eighteen holes at a time.

Another multi-millionaire example is Paul Allen, founder of Ancestry.com. Allen loves ideas. In fact, if you leave him a voice mail he’s probably not going to return it. If you leave him a text message saying, “I’ve got a great idea to discuss with you,” he will respond quickly.

People with Ideation are fascinated by ideas, think outside of the box, and can be creative. They are innovative and often exceptional entrepreneurs. Allen’s first venture was Infobases, which created educational CDs. Then he co-founded Ancestry.com in 1997 which raised $90.5 million in venture capital. Start-ups were Allen’s specialty; he created 10x Marketing, FundingUniverse, and FamilyLink.com, which grew to be the #1 app for families on Facebook, attracting 80 million users.

I met Allen in late 2012 when Gallup hired him to promote StrengthsFinder 2.0. We talked on the phone then he invited me to serve on the Gallup Strengths Coaching Advisory Panel.

An interior designer I know has the Ideation strength. She talks about walking into a house, looking at the furniture, where it’s placed, and immediately envisioning a better design for the room. At night, lying in bed, she thinks about how to design a home and where each piece should go. People with the Ideation strength are easily bored. They need novel ideas and new topics to think about.

Mark Zuckerberg, CEO of Facebook, has Ideation in his top five talents along with Competition, Achiever, Significance, and Command. You can see how he thinks and works smarter by building the Facebook organization and brand, and in doing so has created a person fortune worth $73.1 billion as of August 2017.

The 5 P’s described in the book are:

PASSION — Keep your energy and commitment fully charged at all times by pursuing something you believe in.

PEOPLE — Build powerful teams that can execute your vision.

PRODUCT — Create a product that is innovative, that breaks all the rules, that changes everything.

Zuckerberg hired Sheryl Sandberg as COO, and Sandberg herself is a strong advocate of the strengths management philosophy. In referring to the book, “Now, Discover Your Strengths, she said, “Exposure to the strengths philosophy has been instrumental in how we think about developing talent at Facebook. We try to make jobs fit around people rather than make people fit around jobs. We focus on what people’s natural strengths are and spend our management time trying to find ways for them to use those strengths every day.”

Are you fascinated by idea?  Do you find new creative ways to solve problems that seem impossible to solve?  Does your ideation cause issues when the ideas all come at once?  Let’s have a conversation about where you are in the comments below.

Not sure where you are and need some conversation around that?  Remember you can schedule your Ask Brent Anything call.  Let’s talk strengths.

4 Action Steps to Start or Grow Your Email List.