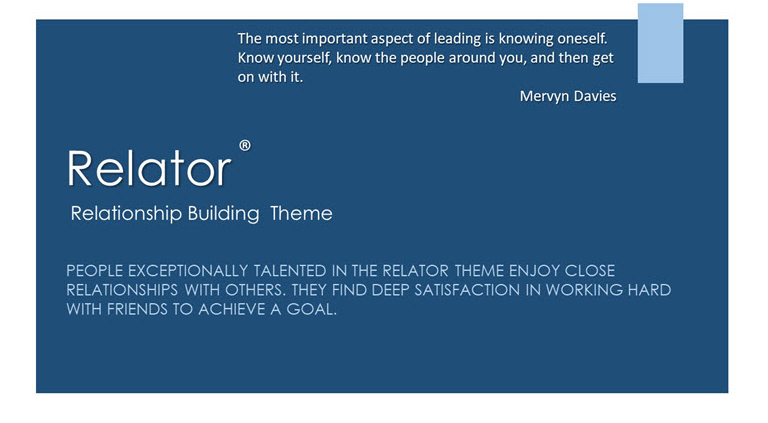 You may think of the Relator® as someone who has never met a stranger, but that’s WOO—winning others over. People with WOO believe that each stranger is a friend they have yet to meet, but Relators are selective about their relationships. They tend to be more guarded and cautious when they first meet people.

Relators are skilled at building better friendships and relationships, not only in their families and friendships but in the workplace as well. It is important for Relators to find and develop deep, trusting friendships in the workplace. The Gallup book, Well Being by Tom Rath, demonstrates how people enjoy better well-being when they have at least one good friend in the workplace. So, if you have a great relationship with your boss, your supervisor, or a colleague, count yourself blessed.

People with the Relator strength have the gift of creating loyal, trusting, sharing relationships that will never break. Guess what? My wife has this strength, too. We have been married for over thirty-six years (and have known each other for thirty-eight), and I always say that any woman who can put up with me for thirty-six years has to have some serious relationship abilities. Many of my wife’s attributes—like her loyalty—come from being a Relator.

Mervyn Davies is the former Chairman of Standard Chartered Bank and is an example of an executive monetizing his Relator strength.

Davies was the chairman of a British multinational banking and financial services company headquartered in London, England. This bank operates a network of more than 1,200 branches and outlets across more than 70 countries and employs around 87,000 people. In the world of business, he is known as one of the world’s most influential. Being the chairman of such a large bank, you would think he would be a stubborn, bottom-line first businessman, In fact, British newspaper The Guardian calls him “that rare breed: a banker [whom] people like.”  How did Mervyn Davies gain the reputation as this rare breed of banker?

His top 5 Strengths are Achiever, Futuristic, Positivity, Relator, and Learner. Davis knew that to be successful in leading this organization; he had to use a Strengths-based leadership approach. He needed to build a leadership team with the same diversity as Standard Charter Bank has in the networks they operate. To that end, he developed an incredibly diverse leadership team focusing on different backgrounds, personalities, and strengths. Knowing his strengths well, he wanted to surround himself with other strengths that would allow them to do things he couldn’t do well.

Once he had his team in place, Davis leaned into his Relator strength to find a way to build trust between himself and his leadership team. According to Gallup.com, “The Power and Edge of Relator: Those with Relator among their Signature Themes form deep relationships and are most productive when they are working alongside colleagues they know well. As a result, they can be great collaborators and bring encouragement to others on their team.” So he set out to form these deep relationships.

He made a point to over-communicate with his team. He would send communications to his top leaders with details about why he was making the decisions he was making. Some of his decisions were considered controversial, and he wanted them to understand where he was coming from to build their trust relationship. He also shared more than work; he shared his personal life too. When his wife developed breast cancer, he sent an email to his top 4oo executives, letting them know what was going on with him and how it would change his schedule for the next several months. His Relator strength makes him value authentic relationships, and he was an example of that.

In addition to being open about his life, he was widely known for helping others put their family first. The result of leaning into his Relator strength created a culture where the employees had an unprecedented level of trust in their CEO.

How are you using your Relator strength to build your team and organization for greater trust? How can your organization become more profitable from building deep authentic relationships?

Here are three questions for you to ponder in order to build deeper relationship with your team:

How can you use your Relator to build a firm of endearment?  Let me know in the comments below. Want to talk with me about how you could monetize your strengths or other business-building questions you have? Please schedule you free Ask Brent Anything call, and Let’s Talk Strengths.

Help Others Understand Their Value Through Strengths
Scroll to top