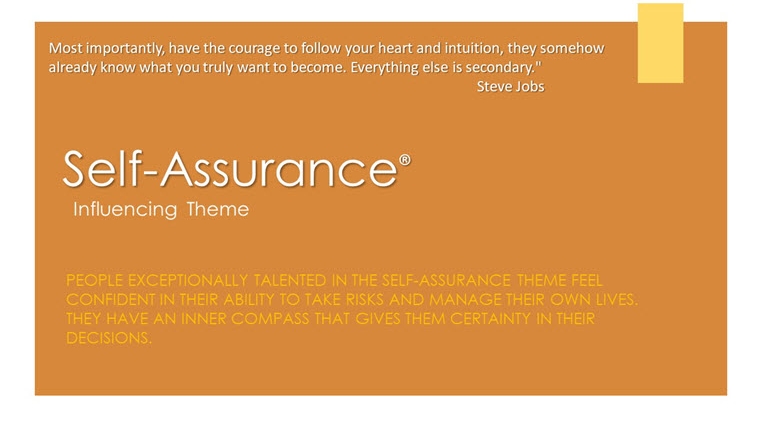 Self-Assurance® is a lot like self-confidence. Individuals with the CliftonStrength® talent theme of Self-Assurance possess a “Can do” mindset. Whereas most people spend their lives wondering if they are “good enough,” the person with the Self-Assurance strength believes in his abilities and is confident in his decisions. As a result of this inner certainty, Self-Assured people are very independent and able to be effective entrepreneurs monetizing their strength.

They are often very influential, almost contagious; others are drawn to a Self-Assured person’s sense of security. Self-Assured individuals run the risk of becoming work-a-holics who fail to spend time on relationships and can become loners because of their hyper-independence. They work hard to reach the top of the mountain and have to work extra hard not to alienate themselves from others.

Self-Assured people should be encouraged to set ambitious goals because their high degree of persistence often results in success. They are excellent sources of stability and inspiration for people who lack self-confidence. Like the keel of a ship, Self-Assured people drive individuals and organizations to perform better.

When Steve Jobs and Steve Wozniak co-founded Apple in 1976 to sell Wozniak’s Apple I personal computer, it was something that was unheard of. In 1977 Ken Olson, President of Digital Equipment Corporation, said: “There is no need for any individual to have a computer in their home.” Can you imagine your life now if Steve Jobs had second-guessed himself when he heard things like that? (Ken Olson was forced to resign in 1992, after the company went into considerable decline and the company was acquired in June 1998 by Compaq.)

March 1976, Wozniak completed the basic design of the Apple I computer and showed it to Jobs, who with his self-assurance demanded that they sell it; Wozniak was at first skeptical of the idea but later agreed. In April of that same year, Jobs, Wozniak, and administrative overseer Ronald Wayne founded Apple Computer Company (now called Apple Inc.) as a business partnership in Jobs’s parents’ Crist Drive home. The operation initially started in Jobs’s bedroom and later moved to the garage. Wayne stayed only a short time, leaving Jobs and Wozniak as the active primary co-founders of the company. The two decided on the name “Apple” after Jobs returned from the All One Farm commune in Oregon and told Wozniak about his time spent in the farm’s apple orchard.

Jobs ran into another obstacle later in his career when he lost Apple to another CEO. In 1983, Jobs lured John Sculley away from Pepsi-Cola to serve as Apple’s CEO, asking, “Do you want to spend the rest of your life selling sugared water, or do you want a chance to change the world?”

Sculley’s and Jobs’s respective visions for the company significantly differed. By early 1985, the Macintosh’s failure to defeat the IBM PC became apparent, and it strengthened Sculley’s position in the company. In May 1985, Sculley—decided to reorganize Apple, and proposed a plan to the Board that would remove Jobs from the Macintosh group and put him in charge of “New Product Development.” This move would effectively render Jobs powerless within Apple. In response, Jobs then developed a plan to get rid of Sculley and take over Apple. However, Jobs was confronted after the plan was leaked, and he said that he would leave Apple. The Board declined his resignation and asked him to reconsider. Jobs then submitted a letter of resignation to the Apple Board.

Losing his company could have been the end of Steve Job’s, but with his self-assurance, he did not let that slow him down.

Job’s stated later in a Stanford University commencement that, “I didn’t see it then, but it turned out that getting fired from Apple was the best thing that could have ever happened to me. The heaviness of being successful was replaced by the lightness of being a beginner again, less sure about everything. It freed me to enter one of the most creative periods of my life.”

Along with all the entrepreneurial determination of a person with the strength of self-assurance, Job’s stated during his battle with cancer, “Your time is limited; don’t waste it living someone else’s life. Do not be trapped by dogma, which is living the result of other people’s thinking. Do not let the noise of other opinions drown your own inner voice. Most importantly, have the courage to follow your heart and intuition, they somehow already know what you truly want to become. Everything else is secondary.”

Do you have the self-assurance that Steve Jobs had when he started Apple? How can you monetize your Self-Assurance strength to make sure that your vision comes to life? Let us know your plan in the comments below. Want to talk with me about this or other strengths questions you have? Please schedule you free Ask Brent Anything call, and let’s talk strengths.