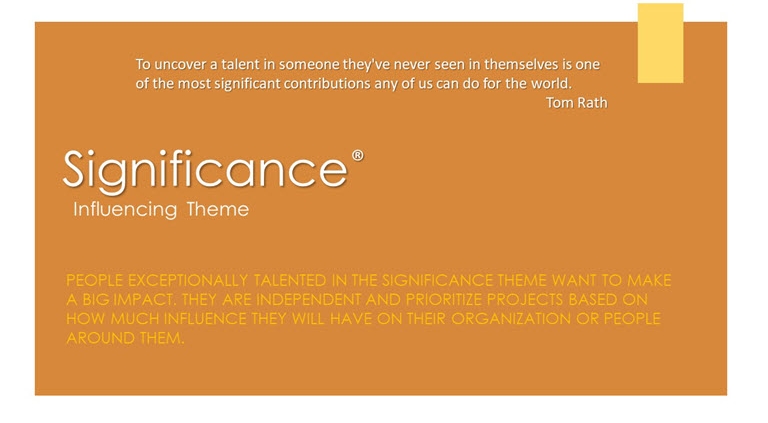 Each of us has a need for significance, a desire to be seen as valuable; however, people with the signature CliftonStrengths® talent theme of Significance® have an intense desire to make a global impact. Their big dreams want to leave a legacy to millions.

It was a significant moment when I heard Tom Rath deliver a keynote at the 2017 Clifton Strengths Summit. Both Donald Clifton and Tom Rath, Clifton’s grandson, have Significance at #1 and #2, respectively. Rath has been living with a rare form of cancer since sixteen years old and is on a quest to prolong his life, slowing down the growth of tumors in his kidneys, adrenal glands, and spine. He never thought he’d live to see forty. (Today, Rath is forty-six.)

In his keynote, he gave an example of his grandfather, Don Clifton’s Significance. Don himself was in his late stages of cancer but wanted to make a lasting impact on Rath before he died. At the time, Rath struggled to see himself as a talented writer and believed it was one of his most significant weaknesses.

During this time together, Rath wrote a twenty-page letter of appreciation, eulogizing his grandfather while Don was still alive.  Through reading the letter, Don spotted a writing talent in Rath. And it was Don who communicated his vision of writing and co-authoring a book with Rath the last year of his life, what became How Full Is Your Bucket? a book about giving genuine praise, appreciation, and recognition to others, filling up their bucket. The book instantly became a New York Times and Business Week Best-Seller.

Rath stated in his keynote that “to uncover a talent in someone they’ve never seen in themselves is one of the most significant contributions any of us can make to the world.”

Rath also surprised us all that day, when he said, “Don’t follow your passion. Instead, find your best contribution to give to the world with your talents.”

CliftonStrengths, formerly called StrengthsFinder, originally launched in 2001, is an online talent-assessment tool that focuses on 34 themes that make up the user’s strengths potential; Now over 22 million people have uncovered their talent around the world.

Gallup uses the tool as part of its fortune 500 consulting as well as for educational sector and universities. For K–12 education, Gallup consults and trains schools and school systems to focus on strengths and increase engagement. Georgia Tech in Atlanta, Georgia, uses the CliftonStrengths in their GT1000 course. GT1000 is the freshman seminar and use the assessment to prepare first-year students to navigate college from a place of strength. The company administers the Gallup Student Poll in the U.S., which measures success based on hope, engagement, and well-being.

Donald Clifton used his strength of significance to influence his grandson’s life. Through this influence, Tom Rath became an author, and using his significance strength has influenced no telling how many lives.

How can you use your Significance strength to uncover someones talent? Have you thought of ways to use this strength to improve your own brand and scale your revenue? Let me know in the comments below. Want to talk with me about this or other strengths questions you have? Please schedule you free Ask Brent Anything call, and let’s talk strengths.